Check out these simple and fun ways to help your baby grow and develop emotionally.

We have found this article by Cynthia Ramnarace on www.parents.com and have adapted it slightly. 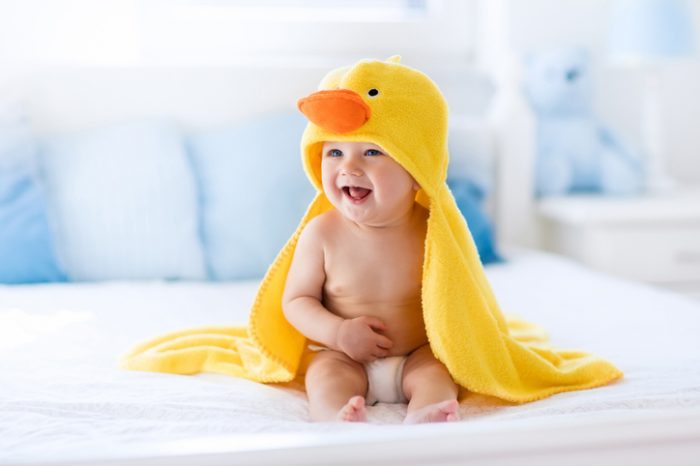 When you think of milestones in the first year, walking and talking come to mind as the major ones. But there are a host of emotional milestones from birth on that will affect your baby’s lifelong ability to learn, overcome frustration, and trust other people. « This first year is one of the most important and influential times in a human being’s life, » says Rahil Briggs, PsyD, director of the Healthy Steps program at Children’s Hospital at Montefiore Medical Center in the Bronx, New York. « An infant is born with more neurons in his brain than he’ll ever have again. In addition to genetics, relationships and experience drive his brain development. » Parents will be happy to know that the things baby needs to get a solid start in life are very basic and totally within our control — no fancy gadgets, classes, or videos required!

Who knew that the simple act of responding to your baby’s cries could have such profound consequences on his development? Of course you’re going to feed him when he’s hungry and change him when he’s wet. And if all else fails, you hold him, rock him, sway him — whatever it takes to stop the tears. All these activities not only help your baby’s physical well-being but also fuel his brain development. « We call this back-and-forth between parent and baby ‘rupture and repair,’  » Briggs says. « Some problem happens, he’s wet or tired — that’s the rupture. When someone comes to help — that’s the      repair. When you respond to a baby’s needs promptly, he learns over time that he can deal with stress and difficult situations. »

By about 6 months, your baby isn’t completely reliant on you to soothe her; she’s learning to settle down on her own. « She’s beginning to internalize that capacity, as if she’s telling herself, I know how to handle this, » Briggs says. Babies who have a loving, responsive caregiver not only have an edge on developing self-control; they are also more able to explore the world around them. If a baby doesn’t have to spend her mental energy worrying whether someone will come when she cries, she can focus on all-important activities like batting a mobile, trying to roll over, or putting various objects in her mouth and noting the differences in texture, shape, and size. All these experiences and discoveries build on one another, spurring more learning.

It goes without saying that you have to pay attention if you want to learn anything. What’s not so obvious is that your baby’s early experiences shape the way his brain is wired to focus in on objects and people, according to Jill Stamm, PhD, cofounder of the New Directions Institute for Infant Brain Development and author of Bright From the Start. At first, the world appears as a whirlwind of noise, images, and sensations. In the midst of all the chaos, your infant will tune in to what’s familiar, like your voice (which he’s been hearing in utero for the past nine months) and what he can see best (namely, your face). When you smile and coo and exaggerate your expressions, you’re telling your baby, Pay attention to this exciting/fun/interesting thing I’m showing you. Every time he looks at a toy you’re dangling or is mesmerized by your smile, certain pathways in his brain light up. So the more you direct your baby to look at things, the stronger those pathways become. « Babies who don’t get these early experiences have a much harder time paying attention. It just takes more energy for them to focus, » Stamm says.

Think of the first words you said to your baby as you took him in your arms. Now, think of the way you said them. Odds are, you used a high-pitched, singsong voice, speaking more slowly as you exaggerated vowel sounds. As it turns out, that’s about the speed at which an infant’s brain processes language — and we naturally adjust to that. If you talk too fast, your baby won’t look at you, but when you slow down and talk in a higher pitch, his eyes lock with yours.

It doesn’t matter that your baby can’t understand a word of what you’re saying when you give her a play-by-play of the day. (« Now we’re going to get dressed. Oh, here’s the outfit from Aunt Lucy! ») Hearing you talk helps her learn the rhythm and sounds of your language so she can decode speech. She’s figuring out word boundaries — where one word ends and another begins. For example, when you say to a 4-month-old, « Who’s Mommy’s best little sweet pea? » she doesn’t hear the individual word breaks; it all runs together as one long sound. Sometime between 6 and 12 months, the brain is able to distinguish syllables and recognize which patterns it hears most often.

Learning Cause and Effect

Just as a baby learns language by recognizing patterns, she also gains a sense of control over her world by looking for associations between things. As your baby’s motor skills develop, she’ll bang objects together and note the interesting sound she’s just created. She’ll conduct experiments like, If I throw the spoon five times from my high chair, will it make the exact same noise every time? What happens when I throw a pea? These experiments lead to exciting discoveries about the world around her: A spoon makes a noise when you drop it; a pea doesn’t. You can squish a pea but not a spoon. They also make her feel powerful because she’s the one making things happen.

Consuming the omega-3 fatty acid DHA while pregnant can aid the very earliest stages of brain development. A study in the journal Pediatrics showed that children whose mothers consumed DHA while pregnant had higher IQs at age 4 than those whose mothers did not. There is currently no recommended daily allowance for DHA during pregnancy, but a 1999 Journal of the American College of Nutrition article recommended 300 milligrams a day.

Fish is the leading dietary source of DHA, but it is not the recommended one while you are carrying your baby. Mercury and PCB contamination is still found in seafood, so the March of Dimes advises you eat no more than 12 ounces of any fish per week, and no more than 6 ounces of albacore tuna. If you want to avoid fish altogether (many women can’t stomach it while pregnant anyway) consider a DHA supplement.

Play is how children learn about and experience the world. Jill Stamm, PhD, author of Bright From the Start, has identified five kinds of toys she believes should be in every baby’s first toybox.

BOOKS: When you read to your child, he benefits from hearing not only the language but also the soothing sound of your voice; plus, he feels the warmth of your body. Be sure to have books that your baby can put through the paces — board books, cloth books, and bath books.

TOUCH TOYS: Soft blocks or a doll that has lots of interesting textures helps your baby develop fine motor control as he tries to pull apart Velcro tabs, or rubs something satin between his fingers.

VISUAL TOYS: Black and white isn’t boring to an infant. The sharp color contrast attracts baby’s attention. Mobiles and activity mats provide lots to look at. And a plastic mirror in the crib may be a source of endless fascination — even though he won’t grasp (until about 9 months) that the handsome boy looking back is himself!

HEARING AND LISTENING TOYS: Rattles and chime toys can stimulate the senses and help your baby learn the differences between sounds and how they are produced.

IMITATION TOYS: Even an 8-month-old wants her own cell phone, right? Playthings such as mini lawn mowers and mini kitchens serve as props to help the under-2 set copy what the big people are doing.

Don’t get too wrapped up in each toy’s purpose. After all, babies just want to have fun — and don’t always play the way you think they’re going to play. One final note: be sure to watch baby’s cues during playtime. « Give your child too much stimulation, and she may shut down by looking away or crying, » says Linda Gilkerson, PhD, director of the Irving B. Harris Infant Studies Program at Erikson Institute, in Chicago. « On the other hand, she may get bored with the same old thing after a while. When she loses interest, offer something new or a little more complex. »

Originally published in the February 2010 issue of American Baby magazine.