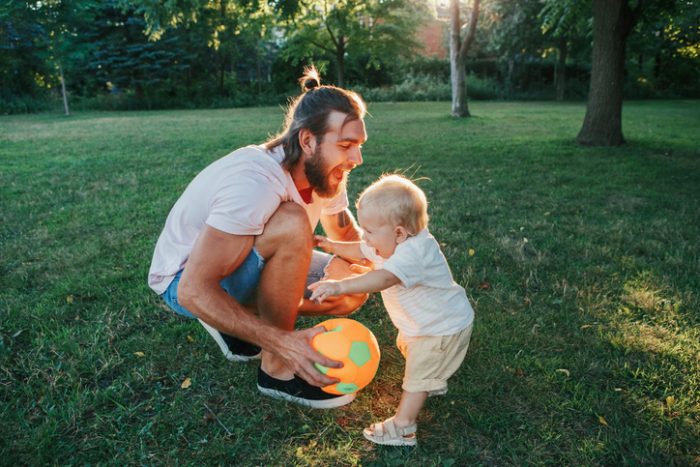 I do have dreams about my kid being wildly successful and happy and amazingly talented at everything he attempts (of course), but my goal as a parent is to give him permission to be, simply, average.

My husband recently said to me, “I want to be okay with Ben being mediocre, because the odds are that he will be.”

That may sound pretty cynical, but he meant it in a purely mathematical way. The odds of our son being a genius or a professional athlete (or both, as my husband dreams of) are pretty low. It’s much more likely that he will be of average ability – it’s just simple statistics.

More than that, my husband had realized something important about his expectations for Ben: they were more about him feeling successful as a parent than about what was best for our son.

As a parent, I want to do everything I can to help my child be successful, but I also want to be aware of the messages that I’m sending. He should be free to define achievement on his own terms, rather than basing his successes or failures on my expectations for him.

Before having Ben, I worked as a mental health counselor. In talking with clients, I became acutely aware of language’s effect on our emotions. Even subtle shifts in the way that we talk to ourselves and to each other can have a major impact on the way we think and feel about things.

For instance, whenever someone asks me, “Is Ben doing _______ yet?” (fill in the blank with any sort of developmental activity), I automatically have an emotional reaction.

If the answer is yes (“Yes, he is crawling!”), then I feel pride and relief. (“Whew, he’s doing well, which means I’m a good parent!”) If the answer is no (“No, he hasn’t started talking yet”), I feel a mixture of anxiety and guilt. (“Is everything okay with him? Have I done something wrong?”)

This is typically a brief, temporary shift in my emotions, so I’m not too bothered by it. However, what if I get asked these questions over and over? The accumulation of small emotional dips can add up to a big concern over time, even when there’s no need for it.

(To this point, when Ben is old enough to understand these types of questions, how will they impact him? « Do you have a girlfriend yet? » « Have you picked a college yet? » « Have you made the varsity team yet? » So many expectations – so many opportunities to disappoint.)

I much prefer when people say, “Tell me what Ben is up to lately.” This is more open-ended and less focused on his « achievements.” If he hasn’t passed any developmental milestones lately, I can simply say, “He’s having fun chewing on stuff and shrieking at the dog,” without the pressure to show off his latest feats of baby genius. There’s no expectation attached to this question, so there’s no way for me to feel disappointed or anxious about the response.

From the time our babies are born, we measure everything based on how they compare to other children. Growth percentiles, for example, literally measure how many babies your child is larger than. If Ben is in the 99th percentile for height, that means that he’s taller than 99 percent of other babies! Sooooo… if he’s bigger than all those other babies, that means that I’m doing better than 99 percent of other parents, right?

It sounds silly to draw that conclusion, but I think that we subconsciously do it all the time.

If Ben is ahead of the curve on X number of baby “achievements” such as crawling, talking, growing, teething, sleeping, etc., then I feel like I’m doing well as a parent. However, what if Ben falls behind the curve and is smaller or later or slower at something? Does that mean that I’m not doing well as a parent? That’s the issue with basing our identities on achievements. Someone always loses even if everyone is doing just fine.

When I was younger, I was a high achievement-oriented student. I always knew exactly how successful I was based on how many people I was ranked above in school. This motivated me to get great grades, but it hasn’t served me very well beyond high school. How do I know if I’m doing well if I can’t measure and rank everyone else around me?

This desire to achieve made it difficult for me to enjoy activities simply for the sake of doing them. If I wasn’t the best at something (or at least above average), then I didn’t want to do it. When your identity is tied up in achieving, it’s a blow to your ego to be bad at anything.

Unfortunately for me (but fortunately for my kid), parenting isn’t something that’s rank-able. I can’t point to a chart and say, “Based on Ben’s speed of crawling plus number of teeth, multiplied by the number of hours he sleeps, divided by his age, I am better than 83 percent of parents out there.”

Really, it doesn’t matter! I want to be the best parent I can be, but that doesn’t have anything to do with Ben’s achievements. It has to do with me showing up, being present, and loving my kid.

I want to give Ben permission to be average because I want him to be free to explore and experience life without worrying about how his experience compares to his peers.

I want him to enjoy learning for the sheer fun of it, not because it will look good on a college application. I want him to jump in, be fearless, and pursue his passions, without being so afraid to fail that he never takes a risk. I hope that he will be fulfilled, well-adjusted, happy, and successful, based on his own terms rather than my expectations.

Here’s the thing though: I won’t be able to stop worrying about Ben’s performance if I feel that my success as a parent is wrapped up in what he achieves. I have to give myself permission to be an average parent first.

There are times when I’ll be a star, spending every waking moment engaging my baby in thoughtful and developmentally-appropriate activities. There are also times when Ben will bonk his head on the coffee table because I was watching “Call the Midwife” and wasn’t paying attention to him. (I’m not speaking from experience or anything.)

This doesn’t make me a bad parent. It makes me normal, it makes me average, and, really, there’s nothing wrong with that.

Source: we have found this article on parent.com.