Why bad jokes are still made about people who speak differently.

An article by The Economist on accent-based prejudices. 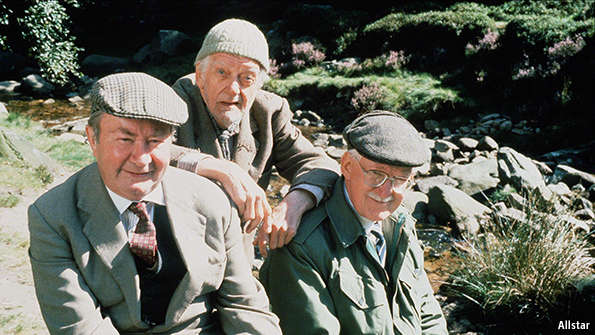 PICTURE this, if you can.

Last month, I attended an international academic conference. During a conversation with a colleague, I was introduced to a doctoral student from a UK Russell Group university.

Without a ‘hello’, a ‘nice to meet you’ or any of the other pleasantries you’d expect to hear during a professional introduction, this woman looked in my eyes and said, straight-faced, in a booming fake Yorkshire accent: « I’n’ti’? »

After delivering her mockery of my dialect (I hadn’t actually used that phrase), she looked away and continued speaking to my male (non Northern) colleague in a perfectly normal tone and her own accent.

The writer is Katie Edwards, a scholar who works on gender in the Department of Biblical Studies at Sheffield University. You can watch her talking about her work on the biblical Eve in advertising here—a charming academic with, yes, a northern accent.

Now imagine a person with another bit of biographical background—black, Jewish or a lesbian, say—meeting someone else, only to be greeted with a broad stereotype disguised as good-natured getting-to-know-you. Now imagine it at an academic conference, coming from a doctoral student at a top university.

This is the last acceptable public prejudice: bad jokes and silly stereotypes about people who speak differently. It plays out differently from other kinds of prejudice, of course. People do not choose their race. Religious beliefs are so deeply held that everyone knows to treat them gently. And sexual preference is now so widely seen as inherent that anti-gay prejudice is vanishingly hard to find in polite precincts.

Language, in contrast, is seen as more freely chosen. And those who have chosen the “wrong” kind of language therefore deserve disdain. To speak English “properly” (which means with a standard accent, and no trace of dialectal grammar) is what any sensible person would choose. Someone who chooses differently, therefore, must not care about high-quality language, or simply did not bother with education. The example above is the worst Ms Edwards can recall, but she repeatedly encounters bewilderment that she did not “lose” her Yorkshire accent (meaning that she did not consciously acquire an accent foreign to her) in order to climb the academic ladder.

The collision of academic prejudice and accent is particularly ironic. Academics tend to the centre-left nearly everywhere, and talk endlessly about class and multiculturalism. Many would love to claim genuine working-class roots. But it is precisely working-class Britons who are most likely to have the characteristic accents of their counties and towns—Scouse, Geordie, Brummie. Those same academics who seek to root out class and ethnic prejudice should be allergic to accent-prejudice.

Instead, scorn for those who talk different is given a cloak of respectability. Kids who go beyond accent and use dialectal or nonstandard forms—ain’t, gizzit, nowt double negatives—are politely told with the best wishes that Standard English is crucial to climbing the economic ladder. This happens to be true, too. Certain rules of grammar and standard vocabulary are expected in formal settings like the workplace. But people can easily use dialect and nonstandard forms in casual speech, and flip to Standard English when the situation requires. Rather than teaching this flipping as a skill, too many teachers find it simpler to attack nonstandard speech as simply “wrong”. And this is especially tempting with urban youth rather than the beloved dialectalisms of a Dorset farmer. But dialect (whether “Multicultural London English” or Dorset) is simply dialect, and no one is really any more wrong than any other. They are all perfectly capable of saying almost anything people want to say, and they all should be left their places alongside the special place of standard English.

But what about speakers like Ms Edwards, who have no trouble with Standard English at all? A vague confusion between ever-changing urban dialects, country dialect and mere accent is probably to blame for the fact that even right-thinking academics slide down the slippery slope and feel free to mock another accent publicly. In this oversimplified mentality, there is the Queen’s English, and anyone who speaks anything else needs our help, the poor dears.

Sensitivity around race, gender and religion sometimes seems to have gone beyond parody in academic circles—the world would do better if we could all speak with a lighter heart more often about these things. And yet accent and dialect are still barely on many people’s minds as deserving respect. More and more regional accents have made it onto BBC shows and other positions once exclusively occupied by posh accents, of course. But old habits remain: in 2008 the Telegraph reported that a poll had found the “least cool” accent in Britain. (Winner: Brummie.) That anyone would hold such a poll speaks volumes.

People have a right to be proud of their accents. They signal class and regional origins that people hold dear. As Ms Edwards says, “my accent’s staying put. So what if it tells people where I’m from? I adore where I’m from.”

We have found this article on The Economist.com.