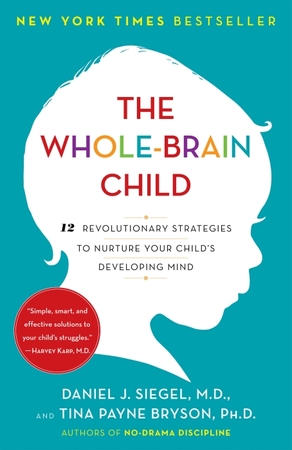 What it is about:

Your toddler throws a tantrum in the middle of a store. Your preschooler refuses to get dressed. Your fifth-grader sulks on the bench instead of playing on the field. Do children conspire to make their parents’ lives endlessly challenging? No—it’s just their developing brain calling the shots!

Why we love it:

In this book, Daniel J. Siegel, neuropsychiatrist, and parenting expert Tina Payne Bryson demystify the meltdowns and aggravation, explaining the new science of how a child’s brain is wired and how it matures. The “upstairs brain,” which makes decisions and balances emotions, is under construction until the mid-twenties. And especially in young children, the right brain and its emotions tend to rule over the logic of the left brain. No wonder kids can seem—and feel—so out of control. By applying these discoveries to everyday parenting, you can turn any outburst, argument, or fear into a chance to integrate your child’s brain and foster vital growth.