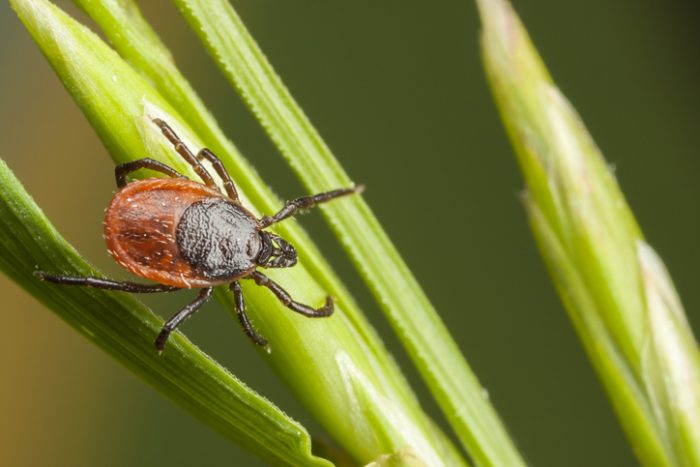 Living outdoors, exploring nature, playing in the woods and meadows are some of the things we love to do with the Little Green House children. Unfortunately, we do not only encounter sweet ladybirds and pretty butterflies. Switzerland is a tick country.

Depending on the weather the tick season starts in March and lasts until November. Three quarters of a year, voracious ticks may consider us a suitable host, while we only want to play outside and enjoy nature. Ticks live mainly in deciduous forests with lush undergrowth and can be found throughout Switzerland up to an altitude of about 2000 metres above sea level. They feed on animal and human blood.

Unfortunately, ticks are not only unpleasant but can also transmit pathogens. The two most common tick-borne diseases are Lyme disease and tick-borne meningoencephalitis (TBE).

The risk of a tick bite can be reduced, although not eliminated, by various measures. These include wearing closed clothing (long trousers and sleeves, stockings, sturdy shoes, trouser legs tucked into the socks) in nature because ticks often sit in the grass, bushes or undergrowth. Tick repellent agents, applied to uncovered skin and clothing, also offer some protection, but this only lasts a few hours. Parents and educators should get into the habit of thoroughly searching their offspring for ticks after a stay outdoors. Ticks most often hide on the head, neck or hairline of children.

TBE is an inflammation of the brain caused by the TBE virus. Infected ticks can transmit it through their bite. According to the Swiss Health Ministry (BAG), tick-borne meningoencephalitis is on the rise in Switzerland, with a significant increase in infections in recent years. The whole of Switzerland, except for the Canton of Geneva and the Ticino, is considered a risk area.

The course of a TBE in children is often less severe than in adults and older adolescents. Approximately one to two weeks after the tick bite, flu-like symptoms with fever, headaches, vomiting or dizziness can appear, which disappear again after a few days. For most patients, the disease is now over.

In a second peak of the disease, signs of meningitis with high fever, severe headaches, neck stiffness and vomiting may appear. However, the brain itself and the spinal cord are attacked less frequently in children than in adults. In most cases, the disease heals without permanent damage. In about a quarter of cases, however, children can also develop a severe illness, which causes long-term damage to the brain and nerves in 2 to 3 out of every 100 children affected.

In adolescence and adults, the risk of a severe course of the disease increases to 30 to 40 per cent. There is no causal treatment for TBE. Only the symptoms, such as fever, can be treated.

Even though TBE occurs less frequently in small children, and the course of the disease is usually less severe than in adolescents and adults, in some cases it can lead to severe illness, sometimes with long-lasting damage.

The pathogen causing Lyme disease is the bacterium Borrelia burgdorferi.

There are several species of the Borrelia bacterium. Depending on the type, different organs are affected in the course of the disease. The first symptom of the disease can be a local redness at the site of the bite, which expands and becomes ring-shaped. Within days to weeks, it disappears. In some cases, after weeks, months or even years, a second stage occurs in which the joints, the nervous system, the skin and, in rare cases, the heart can be affected. A Borrelia infection can be treated with antibiotics. If undetected or insufficiently treated, permanent disabilities can result as a consequence of Lyme disease.

In Switzerland, about 5 to 30% (in some places up to 50%) of ticks are infected with Borrelia burgdorferi. The Federal Office of Public Health assumes that 10,000 people fall ill with Lyme disease in Switzerland every year.

In contrast to the tick-borne meningoencephalitis TBE, there is no vaccination against borreliosis. Therefore, it is vital to protect children and oneself with well-closed clothing and skin protection products. A thorough check of one’s offspring after playing in the forest or on the meadow should be part of the routine.