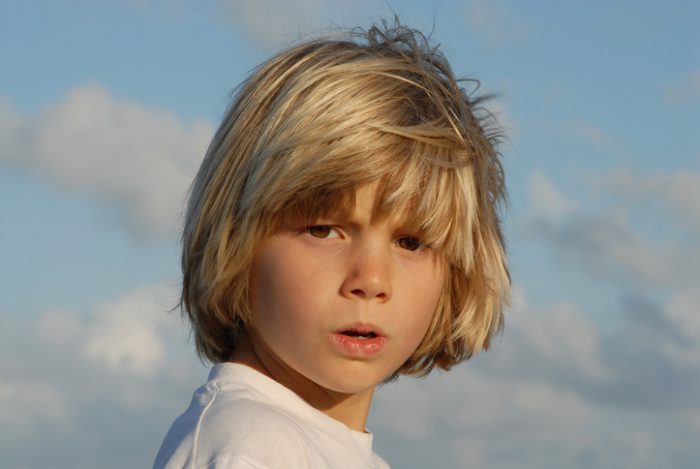 « I will not cut my hair. Never. The answer is never, Mom, and the answer will always be never, so you should just stop asking me.” He said it without attitude, in a matter-of-fact way, as though he were simply reporting on the weather or time of day. At 6 years old, my second-born son, Oliver, has nearly perfected the delivery of undesirable news to others, news that he knows the recipient would rather not hear. He is used to going against the grain by now. Since he was 3 years old, he has dug in his heels about anything and everything. The smallest things strike him as unacceptable: the wrong pair of pants, the wrong dinner, the way his shoes feel or the way he is tucked in at night. He is a child of high standards, and if he disagrees with something, he makes it known.

It’s not that Oliver is a difficult child; he is actually an absolute delight. He is sweet and generous, helpful with his little brother (with all younger children, for that matter). He notices beautiful colors in the flower gardens on our street or the leaves changing in the fall. He delights in the small things and is grateful and polite to others, he is creative and bright. But when he disagrees, he is the most headstrong, stubborn person I have ever come across. He does not comply to be obedient, he complies when he feels it is the right thing to do or it makes sense to him. That can make it difficult to parent him, at times.

All children have a bit of this headstrong, spirited way in them at some point or in some measure. I remember overhearing a conversation between my husband and my oldest son, Milo, then 2, during bath time years ago. Milo had said, “Soon I will grow up and be a man.” My husband, amused and teasing, replied, “Are you going to be a nice man, or a nasty man?” to which Milo replied, “Just a little bit nasty. Not too nasty, though.” Nasty, as in naughty. As in, imperfect. Little did Milo know, his younger brother Oliver, just an infant at the time, would be testing out those limits in full force once his personality fully came through. “A little bit nasty” would come to represent spirited, strong-willed, obstinate, and particular.

Though there are plenty of times when parenting a strong-willed, sometimes disobedient child is a difficult, exhausting endeavor, it turns out there are plenty of benefits to a little bit of naughtiness or disobedience. Research shows that disobedient children earn more as adults and are also more likely to be entrepreneurs. As it turns out, some rather intelligent children who defy authority or challenge the status quo tend to think more outside the box, lending them a certain creative upper hand when it comes to new ideas and starting businesses. Entrepreneurs tend not to play by the rules.

Laura Markham, a clinical psychologist at Columbia University, explains that strong-willed children (those who are described as spirited, headstrong, rambunctious, and even courageous) are usually self-motivated and inner-directed, and often grow into leaders as adults. They are more impervious to peer pressure and go after what they want with more gusto. They want to “learn things for themselves rather than accepting what others say, so they test the limits over and over,” and this relates to relationships as well. Such discernment involves not only when they cut their hair, eat vegetables, or choose to wear a coat, but also in whom they decide to trust and in whom they choose to follow or who they allow themselves to be influenced by.

Of course we must insist for our children to obey us when their lives are in danger. They need to listen when we make them hold our hands in parking lots or crossing streets. They need to refrain from grabbing the sharp end of a knife or the hot burner on a stove. But for the little things, the everyday, non-life-threatening issues, we might let up a bit on them. Obedience as a result of trust, not of broken will, is of chief importance. We want our children to listen to us because they trust that we have their best interest at heart, a trust that comes from discussion, connection, and empathy, not from blind obedience through fear of punishment. We want our children to grow into independent adults who can make important decisions for themselves. So for now, let the little things go. The hair may be unkempt, but the spirit is intact.