No offence to all the wonderful Little Green House dads who care a lot about their families. Still, we couldn’t help but share these math problems with you. 🙂 Written by Kate Tellers at The New Yorker. Enjoy! 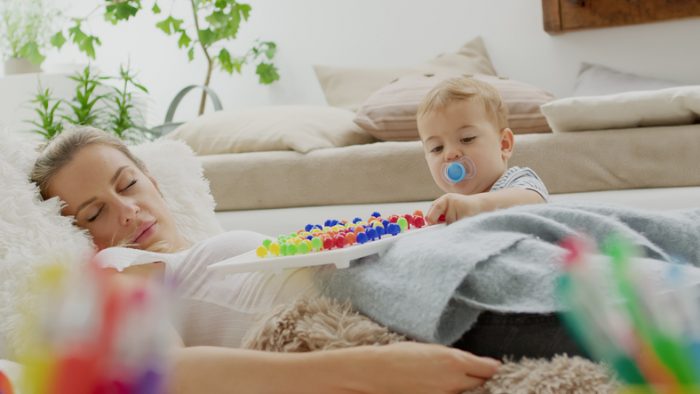 Two trains leave the station at the same time going in opposite directions. The northbound train travels at x m.p.h. and the southbound train at y m.p.h. Three stops in, Julia wakes up from the first uninterrupted hour of sleep she’s got since she had her baby three weeks ago and realizes that she is on the wrong train. How many months before Julia gets sixty consecutive minutes of sleep again?

Felix had an accident during nap time and doesn’t have a spare pair of pants at school. If Felix’s father is listed as the primary point of contact on all documents, how many times does the school call his mother?

If Evie is no longer required to wear a mask to first grade, but Max still needs one for pre-K, how many masks will the family need for the emergency stop at Key Food because Susan forgot to buy juice boxes for Pizza Day?

If Carl sleeps six hours and requires two cups of coffee before he will get the baby, and Virginia sleeps four hours in twenty-minute increments on the floor next to the baby, how many times can Carl tell Virginia he’s “so tired” before she schedules his vasectomy?

If x is the number of four-ounce drinks that a thirty-seven-year-old, ten-weeks-postpartum mother has consumed at her sister-in-law’s wedding reception, and y is the amount of food, how many times does her mother-in-law ask if she’s still nursing?

Glennis spends a third of her life as Nate’s mommy, a third as Mike’s wife, and a third at Starbucks drinking out of a cup with “Gladys” written on the side. When will she feel whole?

If x is the Monday Jess returns to the office from maternity leave and y is her manager who asks her how she liked “her break.” Why? Seriously, y.

Kat is leading a thirty-minute shareholder meeting on Zoom. At minute eight, her naked two-year-old comes into frame holding his diaper; at minute twelve, her cat knocks her seltzer into her lap; and, at minute sixteen, her husband pops in to ask where his other sock is. How many dollars would she pay him to fix the goddam lock on her office door like he promised?

If Alice’s three-month-old exclusively breast-feeds, and each session burns a hundred calories, even the ones her husband sleeps through, and the one that made her miss Thanksgiving dinner, will a thousand calories of cold mashed potatoes eaten later in the dark stuff all her rage down until tomorrow?

Elaine makes twenty per cent less than Chad, who has the identical job to her, but more than Amy, who was laid off when she took four weeks of P.T.O. to have a baby. Elaine envies Amy because she puts her kids to bed most nights; Amy envies Elaine because she has health insurance. Since the pandemic began, they’ve all been buying pot cookies from Claire, who uses the money to pay for daycare because her minimum-wage job doesn’t even cover her rent. If the daycare closes one more time because of COVID, she’ll be fired. Is this supposed to be a question?

Source: We have found this article by Kate Tellers at the website of The New Yorker.