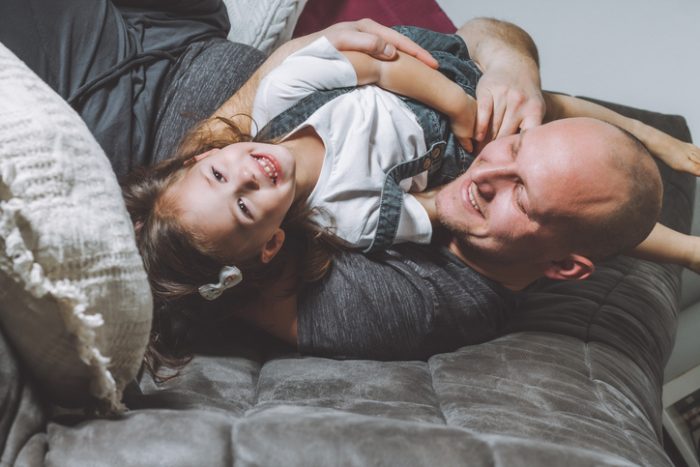 Article by Bobbi Thomason and Michael Cusumano at the Harvard Business Review.

Feeling his infant son asleep on his chest in a BabyBjörn while pitching new clients. Dancing with his 7-year-old daughter to cheer on mom before her weekly partners’ meeting. Being home in the evening to read stories to his twins, complete with making up voices for each character.

While families have been understandably exhausted by many dimensions of the pandemic, remote work led to a profound change for the better in many households: Dads were home. As part of an ongoing longitudinal study on working fathers during the Covid pandemic, we interviewed dozens of dads from across the U.S., in both urban and suburban areas, with a team of researchers from Pepperdine Graziadio Business School and Harvard Kennedy School, and consistently heard how they hoped to maintain such active roles in their children’s lives once offices re-open. If they do, it could benefit them, their families and their organizations. Our project began with an exploratory set of interviews with wives/co-parents who spoke about how the men in our study were indeed participating in meaningful ways.

Working mothers, it’s been frequently reported, have had a rough go of it during the pandemic, leaving the workforce in record numbers when their jobs evaporated or when their partners didn’t step in and their children needed oversight for virtual or hybrid school. That still-working fathers have had the opportunity to become regularly involved in caregiving got far less attention, but it is also a sea change.

These regular and daily caregiving tasks are critically important — over the course of a year, they add up to what’s essentially a second shift of work that women usually take on, often at the cost of their emotional well-being, earnings, and career progression. And then there’s the phenomenon of “shifting standards” where the same behavior is held to a different standard depending on whether performed by a man or woman; there is a risk that so little is expected of fathers that they are applauded for doing almost anything at home, while mothers are penalized for not doing everything.

Indeed, fathers in heterosexual partnerships have historically not taken on much domestic work. And, at the office, men maintain the appearance of being always available and wholly-committed workers. This is not only problematic for women, but for men, too. Specifically, it can leave men feeling overworked and under-familied. Although many love their jobs, too many hours at work can take a toll on their mental and physical health, and leave them craving more quality time with their spouses and children.

There are numerous benefits of paternal caregiving. When dads are involved in coparenting their young children, research finds that their kids have enhanced cognitive and social development. The men and their romantic partners report being happier in their relationships. Their partners also report more satisfying sexual relationships.

But there are workplace upsides, too. In fact, fathers who are more involved with their families are less likely to think about quitting their jobs and experience greater job satisfaction. In this study by Jamie Ladge and colleagues involved fathers reported that their work not only enriches their home lives, but also that their home lives enrich their work. For example, fathers not only appreciated how their work enabled them to understand different viewpoints, which was a skill they brought home to their families, but also how becoming a father allowed them to form deeper relationships with colleagues who were also parents.

Few men in our study became stay-at-home dads or the primary caregivers during the pandemic. But stepping up to become regularly involved at home, even in seemingly small tasks, was meaningful, particularly when it was routine. Spouses spoke of being happier in their marriages, of gaining bandwidth for paid work, and feeling thankful for time together as a family. Ex-spouses even said that working from home during the pandemic helped them parent their children more cooperatively.

Some fathers noted that before the pandemic, they didn’t even see their children every day; they left for work before their children awoke and returned after they were asleep. Now it’s hard for them to imagine going back to that routine.

So what can these dads do once offices reopen? First, they can stay consciously engaged in the day-to-day routines at home. The tasks men stereotypically feel responsible for are important but occasional undertakings. Think clearing clogged drains. Or taking out the garbage. During the pandemic, however, men described being in charge of bath time, cooking dinner with their children, playing tickle monster to wake children up in the morning, and creating scavenger hunts after school.

Several dads in our study stressed the appreciation they received for simply asking their wife what household tasks she hates doing, and taking those on. While it’s great to, say, install the storm windows, those sporadic projects are no substitute for generous participation in daily family life.

Staying regularly involved at home will require working dads to do some negotiating and problem solving with their partners at home and their colleagues at work — especially if being an active caregiver was not dad’s pre-Covid “normal.” And yet research shows that men hesitate to seek family accommodations from their managers, in part because asking for work-family balance is a counter-stereotypical for men. When problem solving with their partners, bosses, or colleagues, dads should keep their counterpart’s interests in mind by considering: how can a new post-pandemic arrangement achieve what is important to them, too?

Some fathers in our study also reported that they already have started to speak up at work about their family needs. In most cases, they say colleagues have been not only receptive, but empathetic and grateful. One father told his team that he’d like to schedule a standing meeting so it allowed him to pick his kids up from school, which prompted one of his teammates to share that he’d like to block out the day his son was home for online learning. Arrangements that may have felt out of reach before the pandemic may be achievable now that managers have seen that working remotely doesn’t kill productivity and employees are now amplifying one another’s desire for job flexibility.

As we emerge from the pandemic, there is an opportunity to choose which pandemic routines stick and which revert to the 2019 way of being. Unlike other post-pandemic decisions, working fathers don’t need to wait for CDC guidelines to learn what kind of father they are advised to be. The research is already clear that being an involved father benefits them, their children, their partners, and their organizations. Post-pandemic, dads have an opportunity to lean in at home.