A baby’s sensory abilities — hearing, sight, smell, taste, and touch — develop weeks before birth. That means that while adults are unable to remember the womb explicitly, we certainly experienced the sounds and sights of our final weeks as a fetus. And recent research suggests that when babies begin to hear in the womb, they also remember what they’ve heard, suggesting that babies in the womb are learning from what they’re hearing. Dads-to-be have a great opportunity to engage with their kid during pregnancy by talking to them in utero. 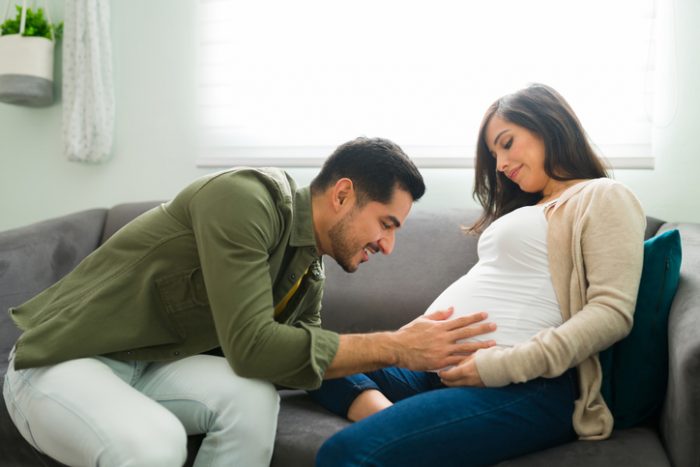 When Can Babies Hear in the Womb?

The inner ear structures begin to develop at around 10 weeks into gestation, but the ability to hear doesn’t occur until all the structures are essentially wired to the brain. Some researchers suggest that some fetuses may develop the ability to hear as early as 14 weeks, as measured by the reaction to sonic vibration. However, one of the most cited studies on fetal hearing, published in 1994 by researchers at the Queen’s University of Belfast, found that babies start hearing in the womb at around 19 weeks of gestation. Specifically, babies in the womb show a response to sounds in the 500 Hz range, which is near the lower-end of what adults can hear. As the structure of the ear develops the acoustic range increases and by 33 weeks unborn, babies show a response to frequencies between 250 and 3000 Hz.

When Does a Fetus Have Cognitive Function?

As any parent of a toddler can tell you, hearing isn’t the same as listening. Hearing is passive, while listening is active and engaged. A fetus might be able to hear the outside world 18 weeks into pregnancy, but that doesn’t mean that they are paying attention. That ability to pay attention, react to, and even remember sounds appears to ramp up in the third trimester.

A 2012 study, again from the fetal hearing experts at Belfast University, examined if a fetus could recall sounds they’ve heard in utero. The study captured fetal behavior in two groups of expectant mothers — one which watched a popular British television show daily and another group that did not watch the program at all. Researchers found that fetus who had been previously exposed to the distinctive theme song of the program would increase their movements when the theme song was played for them later in pregnancy. Fetuses not exposed to the song did not exhibit any changes. Two to four days after birth, newborns played the song again. Those exposed to the song in utero exhibited recognition, while those who were not exposed showed no signs of recognition.

Recognition of a theme song indicates working memory in the late stages of pregnancy and infancy. But that doesn’t mean an infant is learning.

A study published in 2017 gets us closer to capturing evidence of fetal learning. Dutch researchers looked at a population of Dutch-speaking individuals who had been adopted from Korea. Although they had never learned Korean, the individuals had primarily heard Korean language while in the womb and shortly after birth. Researchers conducted their experiment by teaching both Korean adoptees and a control group of Dutch natives words in Korean to see how quickly each group could pick up the language. The Korean adoptees were far more quick and capable in learning the Korean words than native Dutch. Additionally, the ability was as true for children adopted at a pre-verbal age of 6 months old, as it was for children adopted as late as 17-months who might have spoken a word or two of Korean.

Researchers concluded that the basic understanding of language develops in the last trimester when babies are still in the womb, priming them for recognition of the language they are born to. Moreover, the brain remains primed for those languages years later.

What to Say to Your Baby in the Womb

The important takeaway is that listening is crucial for babies before they’re ever born. That doesn’t mean you’ll turn them into geniuses by reading Shakespeare to your partner’s baby bump. It does mean, however, that parents should talk to their baby while they’re still in the womb. Babies will remember the voices and the cadences they hear.

Babies have no choice but to hear a mother’s voice. After all, the voice is with them wherever they go. But that’s not necessarily true for dads. So in order to get in on the fetal learning, fathers should take time to speak to their unborn children. That might include reading stories, telling them about your day, or just thinking aloud.

For bonus points, fathers can start a story time ritual at bedtime. There’s a good chance that once they come into the world, hearing dad’s voice read the same story will cause the newborn to relax and feel soothed, possibly leading to easier bedtimes in the future.

Source: we have found this article by Patrick A. Coleman on fatherly.com.