Crawling is viewed as a key milestone in physical, mental, and emotional development, yet the American Academy of Pediatrics dispels that notion. Some babies skip crawling and go straight to walking. 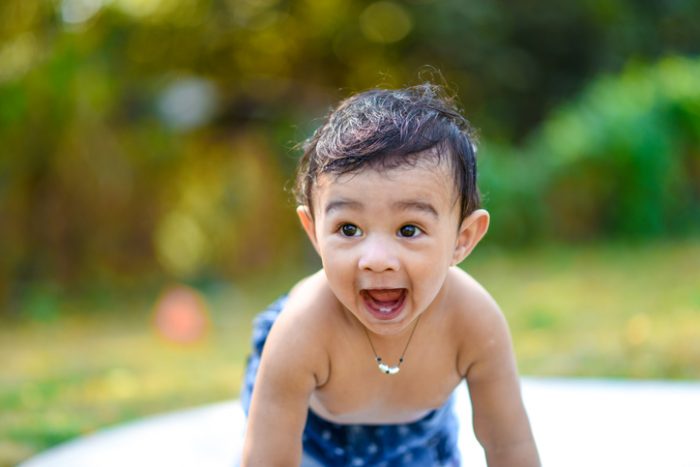 If you’re watching and waiting for your baby to start crawling, the first thing to remember is that there is no perfect or precise age at which babies should start to crawl. As with all developmental milestones, it’s a process, one that contains a multitude of benchmarks and lots of nuance. The key thing to remember is that the evolution of a tiny human is also the emergence of an individual. So when do babies crawl? The simple answer is: When they’re ready.

Babies typically start crawling between 7 and 10 months of age, though some opt to scoot around on their bottoms, roll from place to place, or even crab walk instead of starting to crawl from the get-go. Some toddlers skip learning to crawl altogether. As long as a child is making an effort to get from point A to point B by baby-crawling age, everything is just fine. Parents should focus on encouraging kids to move around, whether that means crawling or not.

“Just hanging out with them on the ground encourages them to crawl or scoot,” says Dr. Aishwarya Deenadayalu of Metropolitan Pediatrics in Portland, Oregon. “Give them the opportunity to try to get to stuff. You can entice them to get to the things they need to get to. It’s nothing fancy. Just having them on the ground is the most important thing.”

The good thing about crawling is that it’s a totally natural process for children, requiring little guidance. Kids are inclined to learn to move, so parents should simply spend time with them on the ground and encourage them to traverse a couple of feet in order to get an embrace or a reward. Extra incentives never hurt, though. Placing toys or other things across the room will encourage movement as well while putting items on low shelves will allow an infant to practice getting up.

Making sure kids are hitting a milestone at the “right” point on the developmental timeline is a huge worry for many parents, and that applies to crawling too. But Deenadayalu says parents shouldn’t really be worrying about movement issues so long as the child is trying, and using all his or her limbs in an effort to move.

“If they’re not trying to get anywhere, if they’re just sort of hanging out on the ground at 7 months, I’d want to hear about that,” says Deenadayalu. “When they try to crawl, if parents notice they’re not using one of their arms or legs and they can’t bear weight on it, that would be concerning. Not if there’s one that’s stronger than the other, but if there’s one that’s not working.”

And an inability to sit upright can also be a warning that something is amiss, though Deenadayalu cautions that lack of mobility can indicate everything from nervous system issues to delayed muscle development to a kid just being a little slower on the uptake. When it comes to concerns about crawling, as with anything else, parents should stay calm and speak to their doctors rather than consult the doom-and-gloom of worst-case websites.

Getting to Baby Crawling Age

Source: we have found and adapted this article by Andy Kryza at fatherly.com.