Have you ever been perplexed by your bilingual child speaking with a hint of an accent in its minority language? Since, being bilingual from day 1, your child should speak a language perfectly, i.e. definitely without an accent? At least that’s what you thought? Turns out that this is not necessarily so, especially in the early years. Dr. Veronika Laughlin, a German linguist and research scientist, living in the US and bringing up her toddler bilingually, shares some insights on her blog bilingual-babies.com. 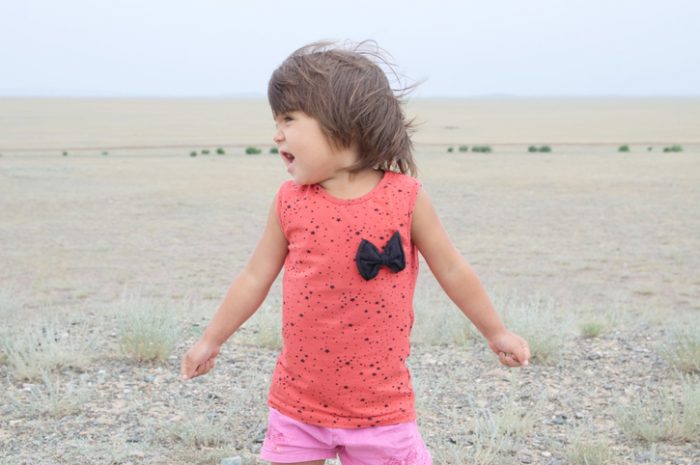 It was around Christmas that we finally bought a CD player again so Ella (2,6 years old) could listen to the three CDs that she had received as Christmas presents from family friends in Germany. As I was still wondering when CD players had become an outdated technology, I found myself listening to one song over and over again: “In der Weihnachtsbäckerei« .

“Mama, in der Weihnachtsbäckerei!” she would say, requesting the song by pointing at the small black CD player on her bookshelf in the living room. Ella L-O-V-E-S that song. She has been singing it full throat on many occasions—while making puzzles in our living room, while riding in the back seat of my car, while walking through our local grocery store… the list goes on! She simply loves that song and is not shy to share it with the world around herself—even though it is already February.

One thing I noticed though was that when singing that song, she pronounced certain words with an English accent. She rolled the ‘r’ in “Weihnachtsbäckerei”, “Leckerei” and “Kleckerei” like a native speaker of English. At first, I was quite surprised and not sure whether I should find that cute or be alarmed by it. I was wondering why that was the case given that she had only heard those words spoken by native speakers of German. Plus, she pronounced all of the other sounds that are typical for German such as the ‘z’ [ts] in Zeit [tsait] or zwei [tsvai] without an accent.

Why would she roll the ‘r’ like a native speaker of English?

There is a phenomenon when languages develop in any bilingual that is called “language transfer.” In other words, it is quite normal for anyone who speaks more than one language to show “transfer” between languages. That means that one language influences the other and you transfer features of one language (usually the dominant one) over into the other language. Transfer can happen at many different levels. It can be related to vocabulary, sentence structure, and pronunciation. For example, a foreign accent is nothing else but a transfer of how a person pronounces words in one language (usually the native language) over into another language. So it is a very common phenomenon (Pearson, 2006).

As a linguist, I deal with transfer and developing language in older children and adults all the time. Also, I know that individuals who have no ‘foreign accent’ in any of their languages are very rare.

Why then was I so surprised that a child who is being raised with two languages from birth, showed transfer in terms of pronunciation?

I think that we have that general idea that when speaking a language to a child from birth, the child will be what we call a “native speaker” of that language. A key feature that we tend to associate with “native speakers” is that they speak without a noticeable foreign accent. They got it down! They know how to pronounce words. As a consequence, they are oftentimes (and unfairly so) viewed as the “perfect yardstick” against which language learners are measured. So raising a child with two languages from birth, we may think of them as native speakers of those two languages. As a matter of fact they are! BUT then…it’s very important to keep the following in mind:

So having a foreign accent is normal for bilingual people! This includes “little bilinguals”—children who grow up with multiple languages from birth. Experts in bilingual first language acquisition such as Harding-Esch and Riley from Cambridge University note that “some bilingual children go through periods during which they speak one of their languages with a foreign accent” (2003, p. 137). Harding-Esch and Riley highlight that this is oftentimes the case when one language (usually the majority/community language) develops more rapidly due to the circumstances.

Thinking about it, that made total sense for us and applies to Ella’s situation. She hears more English than German during a regular day. We live in the United States, her father speaks English, and she attends an English-speaking daycare. I’m the only German speaker around her.

Does the accent eventually fade?

Most likely yes. Experts agree that if bilingual children continue to “receive sufficient practice in both languages, [they] will acquire the ability to speak both without an accent” (Harding-Esch & Riley, 2003, p. 137). They are also very clear on what not to do: it is very important NOT to mock a child’s foreign accent or put her language on the spot, even when it’s meant affectionately. This is important in order to not make them anxious or self-conscious about it.

As parents, we can do the following if we notice a foreign accent in our child’s minority language:

Keep calm and sing on

A foreign accent in the minority language oftentimes does not bother a child at all as long as it doesn’t make her stand out. I guess oftentimes we as parents—and that may very well be the case for me—strive for perfection and as a result, we stress out. Maybe it sometimes needs a reminder to take a step back, and simply enjoy how our little bilinguals are experimenting with the language, how they use it (that in itself is golden!) and how they grow into ever more proficient users of the minority language.

So, for me, personally, that means embrace the English accent when she speaks German, keep interacting in German, and provide a good language role model. In short, we’ll keep singing and listening to “In der Weihnachtsbäckerei!”–even when it’s 35 °C degrees in the shade outside!